In a continuation of our Women in Technology series, we interviewed Falycia H., a U.S. marine and 2.5 year Schwabbie who specializes in security development & engineering. Falycia goes over her passion for technology, which started in high school and followed her throughout her time in the military. As she’s transitioned to her role at Schwab, Falycia mentions how she has utilized mentors in her career journey to reach her potential, the importance of male allyship, and what advice she would give to other women and individuals who’d like to advance their career in the tech space.

Starting when she was in high school, Falycia mentioned that she was “always really into computers.” From being the teacher’s pet in computer class to taking her family’s computer apart and putting it back together, Falycia knew very early on that she wanted to pursue a career in the technology space. She described how, “It wasn’t much of a surprise that I went into the IT field, but it was a surprise to my family that I went the military route and joined the Marines right out of high school.” According to Falycia, joining the Marines was a great way to get her education funded and to be able to travel.

Career Pathing in the Marine Corps 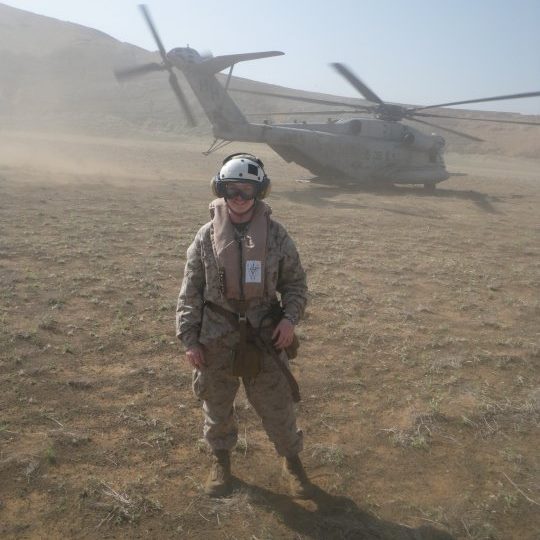 While Falycia served in the Marine Corps, she had the opportunity to continue her passion for technology and work on a variety of projects. During her time as a System Admin, Falycia also ended up meeting her husband. She eventually got stationed in Yuma, Arizona and explained how “we would actually build full-blown infrastructures with tactical gear so the pilots could talk and communicate with each other. That was really fun.” With nights spent sleeping under the stars on the desert floor in Arizona, Falycia got married and was eventually deployed overseas towards the middle east. Her job evolved into becoming the Data Chief and this entailed having to “run entire systems and networking configurations on the actual ship for the marine sides, so that was a challenge.” Not to mention, Falycia said she had big shoes to fill since she was only a sergeant at the time and that role is typically held by staff or individuals in higher rankings.

As Falycia left the military, she moved back to her hometown in Texas and landed a job in the financial sector serving as a systems administration engineer. It was a field that translated well from her experience in the military as, “the regulations, compliance, and auditing mirrored across to those kinds of fields in the military.” Falycia soon added new technical certifications to her resume such as the CISSP (Certified Information Systems Security Professional) and was able to get more of a leadership role. Eventually Falycia found the systems engineering architecture work to be a bit redundant so she started doing more coding and automation on her off hours, even helping her dad host his website. Later on, Falycia described how she, “ended up at Mary Kay for web development and was managing their website. They were doing some cloud migration and I actually kind of grabbed on to that because I liked it a lot more. Then after that, Capitol One poached me.” Falycia mentioned that her friend was the one who pulled her over to working at Capitol One and after Capitol One, she finally landed at Schwab.

During her interviews at Schwab, Falycia was asked what she wanted to do in her role and she responded with a metaphor: “I tend to say that I like to break things. I like to fix things that are broken or a complete mess – I find it comforting. You know when you’re vacuuming your house when it’s a mess and when you’re finished, it’s like an accomplishment? Well, I tend to have the same kind of feeling when I’m cleaning up messy code or restructuring messy architecture and fixing a big problem. So that’s what I told them I wanted to do.” Falycia’s current role as a Security Development & Engineering Director was outlined to fit the description she originally gave during her interview and she has been able to work on multiple application teams as a problem solver on the security side for applications ever since.

Having groups that advocate for female representation in technology, especially in security, is extremely important to enhancing diversity and inclusion. Falycia recognized an opportunity to expand the women specific groups at Schwab outside of already established Employee Resource Groups and that’s how the “Women in Security” (also known as WiSe) group came to fruition. “Since the technical field is so small, I tend to be the only woman on my team and I’m kind of used to it because women only make up 1% of the Marines, so I was also the only woman on my team and in the tech field, it’s kind of the same way – and in security, even more so. I think we were looking for more of a community and a social group that we can collectively put women in and endorse women in STEM to get into this field because a lot of women that I’ve talked to that were even slightly interested in the tech community felt like they didn’t think they can do it or weren’t sure how their current experiences translated to security. I was trying to get a group together that would actually help with the transition for women that were interested in tech or security.”

Supportive Leadership and the Importance of Male Allies

Similar to how Falycia supports members of WiSe, she also receives support from her manager who doubles as her mentor: “My current boss is pretty open with his support for women in cybersecurity. He’s definitely found the importance of my career growth and he’s propped me up for a lot of awards. I’ve had a few mentors across the years and I tend to do what I like to call ‘the smartest person’ in the room. As soon as I get into a specific role, no matter what the role is, I tend to assess who has that background experience, who knows exactly what they’re doing, who knows the ins and outs of certain things, and I tend to latch on to them. I’ll rattle them with questions or look over their shoulder to see how they do things or work though problems. It helps me adapt to the actual role without having to learn on my own and I learn from other people’s mistakes daily.” As far who she has found to be the smartest right now, Falycia credits her manager: “I tend to catch whoever’s the smartest in the room and my manager tends to be the smartest a lot of times.”

In addition to her supportive manager, Falycia also brought up one of the things she sees a lot of places lack in terms of leadership for women in security: “I think a lot of women in security tend to lack a good male leader or that male ally. I think that’s extremely effective in keeping women in cybersecurity and that support they have from their management is extremely ideal. That’s something I’ve been trying to get more movement on at Schwab is that kind of male sponsorship, that male allyship for women in cybersecurity. We don’t want to be treated differently; we just want to have that collective understanding that they support.”

Advice for Women in Tech

When asked what advice she would give to women looking to advance their careers in the tech industry, Falycia explained two hurdles she often sees this demographic face the most: “One is the imposter syndrome. I know a lot of women have that compared to men. They don’t think they have the skills or capability to do that specific role and I think that kind of fear needs to be a bit dampened down. Normally, when people are applying for positions, women tend to think if they don’t meet all the criteria of that position, they don’t even apply for it. That’s not the approach that I think women should take. If you meet a large amount of the criteria, you should still apply for it as many things tend to be something you can learn on the job.” In addition to imposter syndrome, Falycia recommends seeking out a mentor: “There’s not just imposter syndrome, but being able to translate your draft skills. Most people by this time already have some experience under their belt and they don’t want to throw it on the wayside, they want to be able to translate it to something. I think being able to work with somebody that’s currently in that realm or a mentor to be able to help them translate their current experience into something that would fit that role, I think is ideal because it helps you figure out where to start.”

Considering a role in technology? Check out our open opportunities in security and engineering.

Women in Tech: Advice on Mentorship and Advocacy in Security with U.S. Marine, Falycia H.